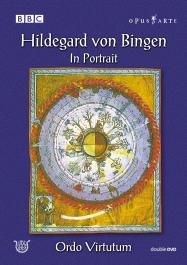 Hildegard (1098-1179) was a remarkable woman, a first in many fields. At a time when few women wrote, she produced major works of theology, music and visionary writings. She used the curative powers of music and natural objects for healing. She is the first composer whose biography is known. Her story is an inspirational account of an irresistible spirit and vibrant intellect overcoming social, physical, cultural and gender barriers.

"Even with the music alone (which has been imaginatively recorded by Sequentia) this is a remarkable achievement, but to see it played out in glowing colours, imaginatively performed and beautifully sung, partly outside and partly inside, in splendidly chosen natural settings, adds an extra dimension to the drama...The accompanying second DVD includes a compulsive BBC 'Omnibus' dramatization of Hildegard's early life before she set up her own order; and no better choice for the role of Hildegard could have been found than Patricia Routledge...This is a film to watch more than once, so it makes an ideal counterpart to the music, which one can return to again and again...This DVD Double is a truly remarkable achievement, but it also surely points the way to the manner of biographical publishing in the future." (The Penguin Guide)

An atmospheric filmed performance of Hildegards Ordo Virtutum (The Ritual of the Virtues), with the dedicated ensemble Vox Animae directed by Evelyn Tubb and Michael Fields. Hildegard - Fully dramatised BBC biographical documentary Starring Patricia Routledge. A Real Mystic - Documentary from Washington Cathedral about Hildegards life and times, commented on by a host of specialists. A Source of Inspiration - Professor Matthew Fox, author of Illuminations on Hildegards paintings. Illuminations - A gallery of Hildegards paintings of her own mystic visions.