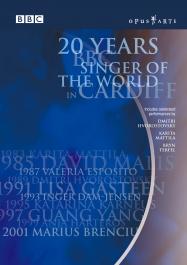 20 Years BBC Singer of the World in Cardiff (BBC)

Over 4 hours of music history! Includes celebrated performances by Dmitri Hvorostovsky, Bryn Terfel, Karita Mattila and 13 other winners. Singer of the World began in 1983 to celebrate the opening of St Davids Hall in Cardiff. Watched by eight million viewers worldwide, it is generally regarded as the world's leading vocal competition, having launched a host of stars onto the operatic stage. In 1989 a Song Prize (previously the Lieder Prize) was introduced, the same year that featured the legendary 'Battle of the Baritones', with Bryn Terfel and Dmitri Hvorostovsky. This DVD celebrates the rich harvest of talent in the first 20 years of BBC Singer of the World.

"A well-directed and informative survey of Cardiffs first 20 years." (Gramophone)

"This DVD set will refresh the memories of those who have watched and listened in years past and will provide evidence for anyone too young to remember all the events." (International Record Review)

Enjoy the winning performances of all 10 competition winners. The History of Singer of the World. Performances by all Lieder prize winners. The Battle of the Baritones.