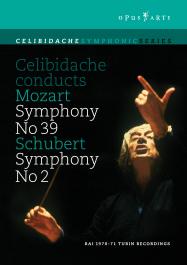 The conductor Sergiu Celibidache was a legend inhis own lifetime, mesmerising orchestras with his intensity and brilliance, both in rehearsals and inperformances - which were always conducted from memory. These recordings pair the first of Mozart's last three symphonies, which Misha Donat puts "among musical historys most miraculous feats of concentrated inspiration" with Schubert's second Symphony, an extraordinary work from a 17-year-old. The Celibidache Symphonic Series celebrates the historic release on DVD of rare footage of the few performances ever recorded for television.

"His intense, finely balanced and deeply felt interpretations made him one of the greatest names in twentieth century orchestral conducting. Above all, he was a superb technician." (All Music Guide)

This release also includes a non-symphonic work by Cherubini as an extra feature, his Overture to Il portatored'acqua.Includes 32-page booklet in three languages, with anewly-commissioned essay from Misha Donat on the genius of Celibidache together with enlightening notes on the individual works.