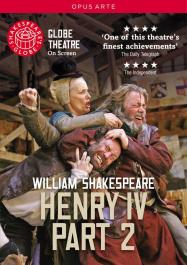 Dominic Dromgoole's acclaimed Olivier award-winning production is brought to its conclusion in Part 2 of Shakespeare's historical masterpiece, Henry IV a thrilling tale of family, treachery and war that surveys the entire panorama of English life. Staged with terrific aplomb (Daily Telegraph) and featuring a stellar line-up, this magnificent Globe Theatre performance showcases some of the Bards deftest dramatic skill, and confirms why Henry IV is regarded as one of Shakespeares finest works.

"Henry IV is the Shakespeare play that's perfectly suited to the Globe. In Dominic Dromgoole's intelligent, faithful andentertaining new production, Sir John Falstaff, that 'sweet creature of bombast', might have stopped for a pint of sack in Southwark en route for a rendezvous with Doll Tearsheet at the Boar's Head." (The Guardian)

"It is the first time these wonderful plays have been staged at the reconstructed globe and it may be one of this theatres finest achievements." (The Daily Telegraph)