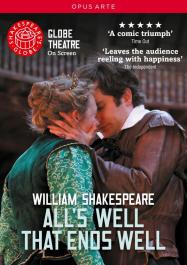 Shakespeare's Alls Well That Ends Well centres on the tale of Helena's quest to marry the man she loves, the rather unimpressed Bertram, who initially refuses her due to her lack of social standing. Aided by fellow conspirator Diana, Helena devises a fail-safe scheme to ensnare her man. The production, directed by John Dove, stars Sam Crane and Ellie Piercey as Bertram and Helena, and includes performances by James Garnon as troublemaker Parolles and Janie Dee as Bertrams interfering mother, the Countess of Roussillon. With lavish staging and costume, the production is a triumph that, according to The Independent, leaves the audience reeling with happiness by the end.

"With so much to praise, it is hard to prioritise, but here goes." (The Independent)

"This is a good, clear, well-spoken production by John Dove of one of Shakespeare's most beguiling but least-loved plays." (The Guardian)