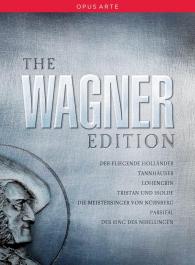 This set presents all of Wagners mature operas from seven leading European opera houses recorded during the last decade, featuring many of the most acclaimed Wagner singers of our age, in productions which exult in the force of Ezra Pounds dictum, Great art is news that stays news. The directors Harry Kupfer, Nikolaus Lehnhoff, David McVicar and others heed Wagners own persuasive plea, Children, make it new, in stagings employing sophisticated modern technology within grand designs which face up to the breadth of Wagners dramatic genius and the social and political implications of his work for us today.

"...must give utmost praise to conductor Hartmut Haenchen, who offers a whip-smart account of the score..." (International Record Review - Der Fliegende Holländer)

"the best small screen realisation of a Ring opera I have seen." (International Record Review)

"Thomas Grimm gets his cameras in close, leaving the singers to track reactions to solo utterances but missing some crucial interplay. Within a natural sound spectrum, some tweaking has been done to pull out solo lines in ensemble, but the emotions of Lehnhoff's vision ring true and will give pleasure." (Gramophone - Lohengrin)

"Musically, it was judged faultlessly for the scale of the theatre by Vladimir Jurowski, who conjured playing of mercurial clarity - not the first words one would normally choose for this gargantuan score - from the London Philharmonic Orchestra, sustained with unfailing vigilance and concentration." (The Guardian - Die Meistersinger von Nürnberg)

"I dont think that I have ever witnessed a more perfect realisation of a Wagner opera than this superb Tristan und Isolde...[Jirí Belohlávek] is scrupulous with the score, and takes his time over it: the pauses and silences are immense and there is no factitious attempt to whip up excitement by speeding...a great and unforgettable occasion" (The Daily Telegraph - Tristan und Isolde)