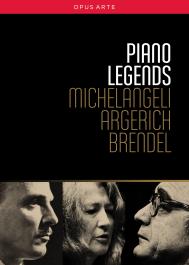 Drawing on a vast range of classical repertoire that includes someof the greatest works in the piano literature, this special collectionsurveys the legendary status of three of the most outstanding recording artists of our time. From Martha Argerich’s thrilling live recordings of Mozart, which pay tribute to her teacher Gulda, to Michelangeli’s famously rare 1962 RAI television performances.The set also includes – in addition to his interpretations of Haydn, Mozart and Schubert – an illuminating 70-minute documentary exploring the private world of acclaimed pianist Alfred Brendel.

Beethoven Sonata in C Op.2 No.3

Sonata in B flat minor Op.25

"A wonderfully warm and detailed picture of the great pianist ... a superlative production throughout ... Brendel in Portrait is an exemplary DVD." (Billboard - Brendel)

"Mr Brendel’s playing is that of a connoisseur; at every turn, you feel his obsessive interest in how the beautiful thing has been put together, in what makes it tick." (New York Observer - Brendel)

"This recital was filmed and recorded by RAI at Turin in 1962 and is black-and-white. The playing is anything but. Michelangeli plays with an amazingly wide range of colour and refinement of dynamics and touch." (The Penguin Guide - Michelangeli plays Debussy)

"... the visceral thrill of the playing of Martha Argerich, the elusive pianist and cult favourite, certainly merited the eager anticipation that her appearances always generate." (The New York Times - Argerich)

"Martha Argerich and her musical companions radiate a delight in music-making that makes this concert, recorded in Tokyo, a highly enjoyable and satisfying musical experience. The camerawork is devoid of gimmickry and places the listener to good advantage throughout. What a fine and expressive player Renaud Capuçon is! In the D minor Concerto Argerich is magisterial." (The Penguin Guide - Argerich)

"... her fiery account of the great D minor Concerto K466, in which every phrase in imbued with her personality." (BBC Music Magazine - Argerich ★★★★★)