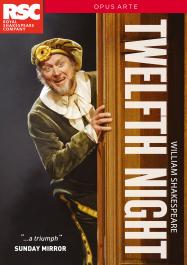 ​Twins are separated in a shipwreck and forced to fend for themselves in a strange land. The first twin, Viola, falls in love with Orsino, who dotes on Olivia, who falls for Viola but is idolised by Malvolio. Enter Sebastian, who is the spitting image of his twin sister... Twelfth Night is a tale of unrequited love - hilarious and heartbreaking.

"Sumptuous romp is a festive season treat ... Heavens, this does look lovely. The RSC has gone all-out on a sumptuous design (three cheers for Simon Higlett). An unending delight; John Hodgkinson is a deliciously mercurial Sir Toby and Michael Cochrane’s Sir Andrew is cherishable." (Evening Standard ★★★★)

"Christopher Luscombe’s deliciously louche production…it’s a visual feast…sumptuous nostalgia. Adrian Edmondson steals the show as Malvolio ... Terrific. The cornerstone is Simon Higlett’s set which seduces the eye with the rich Moroccan colours of the Arts and Crafts movement steeped in sepia light. Awash with spectacle and fastidious detail, it’s surely another seasonal hit for the RSC." (The Daily Mail ★★★★)

"The most heartwarming production of Shakespeare at the RSC since director Christopher Luscombe’s last, three years ago. That double-header was unforgettable – his latest is in the same league. Adrian Edmondson brings a hilarity beyond The Young Ones, with darker intent too. Lavish designs by Simon Higlett…Nigel Hess’s Victorian-influenced score is the perfect accompaniment.Christopher Luscombe has again delivered a triumph, perfect for the festive season." (The Sunday Mirror)

"Christopher Luscombe’s decision to set this peerless comedy in 1890s England yields some fine sets by Simon Higlett, some lively tunes by Nigel Hess and lends the evening an air of Wildean gaiety." (The Guardian)

"Adrian Edmondson is fantastic as Malvolio. He possesses a hypnotic quality of unpredictability. John Hodgkinson delivers a great parcel of comic joy as Toby Belch, and there’s a joyously funny Aguecheek from Michael Cochrane. If music be the food of love, get ready to lick your lips: Christopher Luscombe’s RSC production of Shakespeare’s melancholy comedy sounds – and looks – sumptuous. Lavishly designed with a lush, romantic score, and stuffed with smart ideas. The wealth of detail is richly rewarding ... Kara Tointon’s forthright Olivia glitters alluringly…Vivien Parry’s Welsh Maria is warm and witty…Dinita Gohil’s bright, lively Viola...a delicious cameo by Sarah Twomey as Fabia ... Adrian Edmondson has flashes of dark, comic brilliance. Frothy fun – but with bite." (The Times)