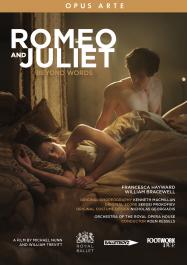 Prokofiev: Romeo and Juliet - Beyond Words (The Royal Ballet / BalletBoyz)

Romeo and Juliet: Beyond Words is a drama feature film created by the International Emmy Award-winning Michael Nunn and William Trevitt, starring the dancers of The Royal Ballet in Kenneth MacMillan’s classic ballet and set to Sergei Prokofiev’s original score.
Highlighting the essence of MacMillan’s world-renowned choreography, Nunn and Trevitt’s Romeo and Juliet takes viewers into the action with a striking intimacy. Through detailed portrayals by The Royal Ballet dancers, audiences come to know Shakespeare’s iconic tale as a gripping story through an audacious experience that is by turn epic and intimate. With the story presented in a ground-breaking new
light, the film captures the extraordinary performances that have earned The Royal Ballet the reputation of producing the greatest actor-dancers in the world, and their artistry pays tribute to a production that is internationally recognised as the zenith of the dance storytelling. Re-imagined for the camera
by Nunn and Trevitt, the film delivers a new realism and appeals to a global audience of theatre, dance and film fans alike. Starring Francesca Hayward and William Bracewell in the title roles.
This is the story everyone knows, told in a language everyone understands, presented in a way never seen before.

"Shot on location with lashings of fighting and flirting, Romeo and Juliet: Beyond Words is a vibrant, up-close take on one of the Royal Ballet’s best-loved gems." (The Guardian)

The Making of Romeo and Juliet; Rome and Juliet: Q&A with the cast and crew; Cast Gallery