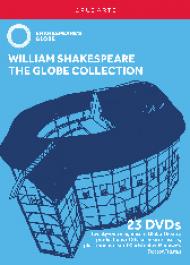 Shakespeare’s Globe, the reconstruction of his most famous London theatre,

is at the centre of the astonishing global fascination with Britain’s greatest playwright. Completed in 1997, it is a living theatrical experiment that has allowed audiences to experience the impact of Shakespeare’s stories in the architecture for which he wrote; the result has been a rediscovery of the plays in all their human richness.

This collection brings together 22 Globe Theatre productions from 2009 to 2015 – during the artistic directorship of Dominic Dromgoole – featuring the finest actors and leading directors in a project committed to creating ever wider access to this rich cultural heritage. Shakespeare’s Comedies, Histories and Tragedies contain dazzling poetry, romance, epic power struggles, human suffering and ingenious, raucous humour.